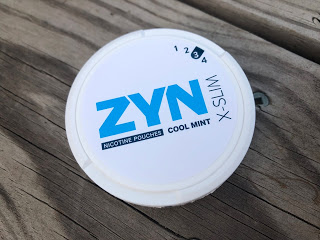 Swedish Match is a company who likes to break new ground – and the super-slim category is an example of that. They kicked it off back in 2016 with G3 Mint Super Slim, a snus product. In 2019, they released the first “all white” super slim product – G4 Tact. And now, they’ve released the first super slim nicotine pouch product: Zyn Cool Mint (X-Slim).

This is another Swedish market version, so it’s a moist pouch, but now super-slim in format!  If you’re new to this type of stuff, nicotine pouches are a growing category which are like snus, except they contain nicotine, but no tobacco.

This is how Swedish Match describes this product: “NICOTINE WITHOUT TOBACCO: ZYN is for those who like to enjoy nicotine but dislike the experience of tobacco. You can use ZYN anytime and anywhere – just put the portion under your lip.”

The flavor description for this one says, “Zyn Cool Mint has an intense peppermint flavour with a refreshing and chilling aftertaste.” This product has 20 portions in a 10.6g can, for 0.53g portions. The nicotine content is 14mg/g (1.4%), or 7.42mg/portion. 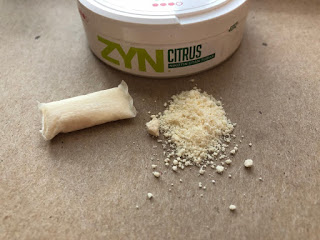 When is Zyn not Zyn?

If you’re used to the Zyn products sold in the US or those sold as “Zyn Mini Dry” in Sweden, these probably look quite different. They aren’t as dry, and they look much like the other all-white snus products sold on the market. These don’t contain tobacco, however, they’re not going to be like an Epok or a G4.

These are going to be closer to Skruf’s new Skruf SuperWhite. This Zyn product is a moist product, still tobacco-free, and containing nicotine, vegetable fiber and cellulose powder (E-460).

While it may look like other white tobacco products, it doesn’t actually contain tobacco. 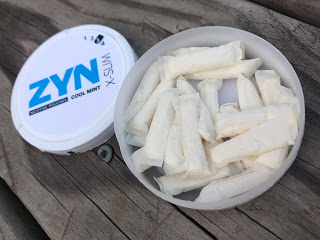 This one reminds me a lot of the G4 Blue Mint product. The aroma is a gentle, mild, lightly sweet, smooth smell of peppermint. The portions are super slim, as the name says, but they’re not tiny or anything. Though they have as much material in them as a mini portion does, they feel more substantial, if that makes sense.

Since it’s a mint product, you’ll also get a mild cooling sensation in the lip.  The flavor is a very smooth, mild, lightly sweet flavor of peppermint.  It’s not too sharp, and not too bold.  I like how gentle it is.  The nicotine strength feels to be around the regular strength level, so it’s not too strong.  The flavor, on average, seems to last about 45 minutes.

If you like nicotine pouches, but want something in a much slimmer format, you may really dig this one.  It’s a Swedish-market product, and I haven’t seen any stores selling it to the US/EU.  But if you’re in Sweden, check it out.  It’s pretty tasty stuff.